This is a curated list of geospatial software projects that show what the developer community has built with the WorldWind Planetary Globe Engine. Please note that these projects are developed independently and externally from NASA leveraging its public, open-source release unless stated otherwise in their description.

If you desire to submit a project to be considered for its inclusion in this list, reach out to the WorldWind team at arc-worldwind@mail.nasa.gov with the subject “Showcase submission” or just use the e-mail link preceeding these words. 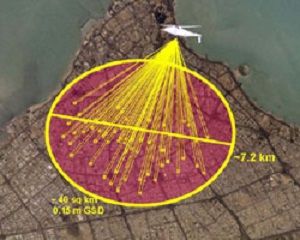 The DARPA ARGUS-IS program mission is to provide military users a flexible and responsive capability to find, track and monitor events and activities of interest on a continuous basis in areas of interest. The ground processing subsystem enables users to interact with the ARGUS-IS airborne systems. The user interface, based on NASA WorldWind software, facilitates specification of areas where imagery is desired throughout the entire ARGUS-IS field of view. A next-generation system enables persistent surveillance of wide areas Brian Leininger, ARGUS-IS Program Manager, SPIE March 2008. 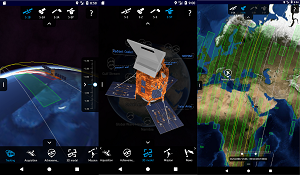 Developed by the European Space Agency, the Sentinel App is a gateway to knowing the Copernicus Sentinel satellites. It lets users track the satellites in real-time, discover their key elements, read the latest news and learn more about their products. Users can, among other things, explore detailed 3D models of the satellites, see the last and next time they have been and will be over the user's location, move the satellites to the time of the last data transmission and smoothly move them back to their current location over the 3D globe. Notifications can also be set to be warned when the satellites are flying by. Available for Android and iOS.

Earth: How did it change? 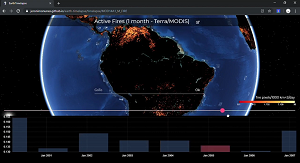 "Earth: How did it change?" is a visualization web app that allows users from all ages to see how the earth changed over time. We allow users to select one of several datasets provided by NASA Earth Observations and visualize such data in chronological order. Through a minimalistic interface, the user is able to explore how the Earth changed over time. This application was a global finalist in the NASA SpaceApps 2019 global hackathon. 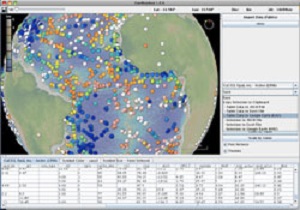 GeoMapApp (formerly MapApp) is a freely downloadable Java application, which permits users to browse bathymetry data from the world's oceans, generate and download custom grids and maps, and explore a variety of other data types. GeoMapApp is a data exploration and visualization tool that is continually being expanded as part of the Marine Geoscience Data System. GeoMapApp is an integrated mapping application developed at Lamont-Doherty Earth Observatory. Developed by William Haxby, with support from the LDEO Marine Geoscience Data System. 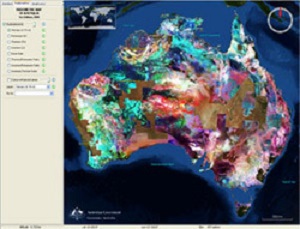 Geoscience Australia's WorldWind Viewer is an application that displays Australia's continental data sets. The viewer allows you to compare national data sets such as the radioelements, the gravity and magnetic anomalies, and other mapping layers, and show the data draped over the Australian terrain in three dimensions. The viewer currently displays the following Geoscience Australia data layers: Radiometric Map of Australia, Gravity Anomaly Map of the Australian Region, Magnetic Anomaly Map of Australia 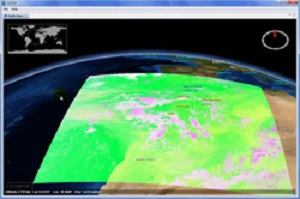 GLIDER (Globally Leveraged Integrated Data Explorer for Research) is a NASA ACESS funded project managed at University of Alabama Huntsville ITSC. The goal of this project is to integrate three existing applications, namely WorldWind, Interactive Visualizer and Image Classifier (IVICS) and the Algorithm Development and Mining (ADaM) toolkit into a single seamless tool for research and education community. GLIDER will be a complete comprehensive, easy to use tool for thematic information extraction from NASA imagery. 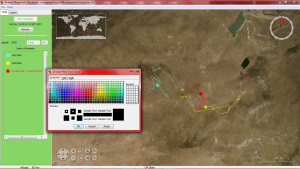 The University of Maryland Department of Biology, has created the Animal Movement Visualizer to display animal location data in real time. This software can be used by ecologists and researchers to track the migration patterns of animals, simply by uploading coordinates via an excel file. 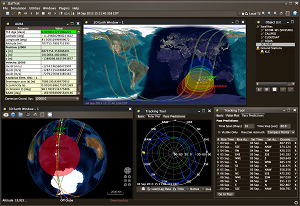 JSatTrak is a Satellite tracking program written in Java. It allows you to predict the position of any satellite in real time or in the past or future. It uses advanced SGP4/SDP4 algorithms developed by NASA/NORAD to propagate the satellite orbits. The program also allows for easy updating of current satellite tracking data via CelesTrak.com. Because this application was written in Java, it should run on almost any operating system or directly off the web using java web start! Version 3.0 requires Java 1.6 - and uses NASA's WorldWind Java SDK (included) and JOGL for 3D rendering (included for win). Developed by Shawn Gano. 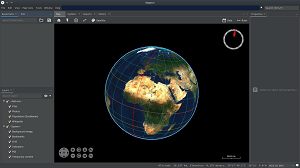 Mapton is a Free and Open Source map application that is easy to use and runs on your desktop. It consists of a rich set of background maps and a toolbox, combining the simplicity of a mobile app with the capability of being extensible with powerful custom plugins. On its own, Mapton is a capable map application, however, Mapton is also a platform for GIS related plugin development. Mapton is developed by Patrik Karlström. 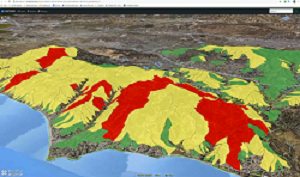 In the past, the information collected on everything from burn severity, to slope, vegetation, and soil type may have taken as long as a week to collect and distribute. Now the distribution of that same information takes just minutes using the NASA Rehabilitation Capability Convergence for Ecosystem Recovery (RECOVER) decision support system. RECOVER is available across 11 Western states and is the result of a collaboration between NASA’s Applied Sciences Program, NASA Goddard Space Flight Center, and the Idaho State University GIS Training and Research Center (GIS TReC). 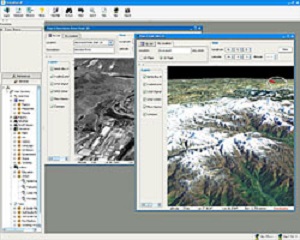 The free high tech learning portal for kids throughout the world. MyUniPortal combines information from different sources such as html, video media, search engines into an interface that allows the data to be placed into separate windows specific for that data (Browser, Video Viewer, Query Viewer, 3D Maps). Developed by Anthony Anecito. 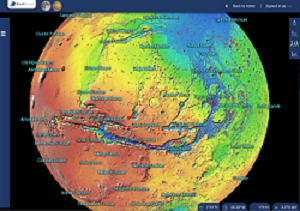 PlanetServer is a Service component of the EarthServer-2 project funded by the European Commission. It is aimed at serving and analyzing planetary data online, mainly through OGC Web Coverage Processing Service (WCPS). The focus of PlanetServer is on complex data, particularly hyperspectral imaging and topographic ones. Data from Mars, the Moon and other Solar System Bodies will be available and queriable. Its visualization client is powered by Web WorldWind and the Raster Data Manager (Rasdaman). 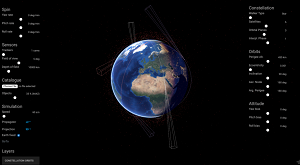 Vyoma is a company that provides space situational awareness (SSA) services to satellite operators such as conjunction assessment and orbit determination. One of their satellite constellation visualization tools is built on top of Web WorldWind. It lets you visualize the Earth's orbital environment and enables the user to add a custom satellite constellation with multiple parameters: Orbital characteristics; yaw, pitch and roll bias and spin rate, and an assortment of camera sensors with customizable field of view and depth of field.

WorldWind Geo is an experimental geo browser built on top of two of the best open source technologies: the WorldWind Java SDK and Eclipse. The new version of our 3D globe is closing the gap between GIS & SIS (Scientific Information Systems) by incorporating low/med/hi resolution GIS datasets from multiple sources: NASA, MS Virtual Earth, and others plus the great java NetCDF library for plotting/subsetting capabilities of scientific data. Developed by Vladimir Silva. 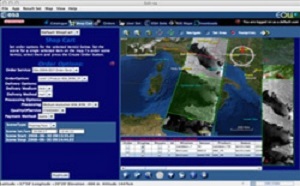 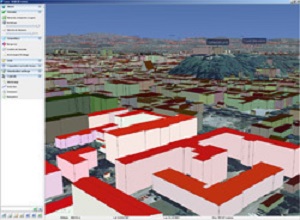 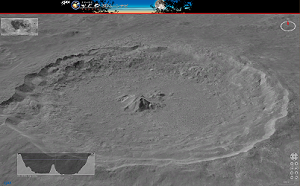 Developed by the Japan Aerospace Exploration Agency (JAXA), Kaguya 3D Moon NAVI ets you browse the images and data obtained by the Japanese lunar explorer "KAGUYA". This application is developed using the WorldWind SDK by NASA (Java Ver.) and works on multiple platforms.

Fly an F-16 and immerse yourself in the cockpit as it maneuvers over the terrain. All made possible through a collaboration between NASA WorldWind, Oracle and DiSTI. Here together you’ll see these three powerful technologies—NASA’s WorldWind, Oracle's Java Open GL and DiSTI’s new GL Studio for Java—converge to enable Java developers to leverage spatial data in a 4D world with incredible virtual reality.

We added a new Showcase section to the website featuring a curated list of third-party geospatial software projects that show what the developer community has built with the WorldWind Planetary Globe Engine.

Please note that these projects are developed independently and externally from NASA leveraging WorldWind’s public, open-source release unless stated otherwise in their description.

If you desire to submit a project to be considered for its inclusion in she Showcase section, reach out to the WorldWind team at:

Please add the subject “Showcase submission” or simply use the link above.